Home > Who We Are

“How many of you pray for Christians who are persecuted? Ask yourselves, do I pray for that brother or sister who’s in difficulty for confessing their faith?” — Pope Francis

Under the guidance of the Holy Father, Aid to the Church in Need provides pastoral and humanitarian assistance to the persecuted Church around the world. For more than 74 years, our donors have reached out to the suffering, the distressed and the poorest of the poor in over 145 countries.

Each year, we fulfill more than 5,000 projects through our spiritual and material aid programs. Our shared goal: To help strengthen the Church and keep the Faith alive.

Where there is darkness and despair, we provide light, hope, and a constant sign that the Church is a dynamic, single, universal body in Christ. By reaching out to the discarded and the desperate, we help keep the Faith alive. 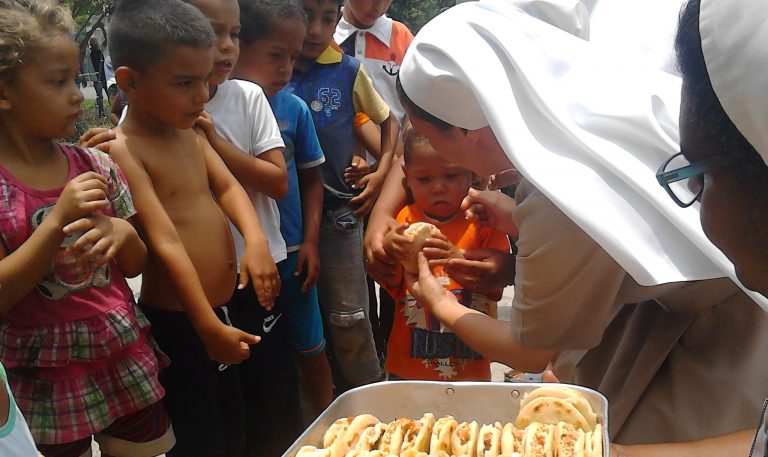 History and Timeline of Aid to the Church in Need

Founded in 1947 to meet the material and spiritual needs of homeless and displaced victims of post-World War II, Aid to the Church in Need grew rapidly and its programs expanded. Thanks to concerned and compassionate Catholics, the organization initially assisted thousands.  Today, millions of people in need are aided worldwide.

1950s Aid to the Church in Need began assisting religious serving within Communist countries like Hungary and Poland. ACN also built “fortresses of God,” whereby churches were constructed along the Iron Curtain.  In 1959, the organization shone the spotlight on the suffering and persecuted in Asia.

1962 At the Second Vatican Council, Pope John XXIII asked the organization to expand its work to Latin America, and over the next five decades, Aid to the Church in Need’s scope continued to grow to meet the needs of the suffering Church. ACN soon began working in the Philippines, and then in Africa.

1975 ACN’s outreach grew to include Vietnam, where Aid to the Church in Need began providing for the “boat people,” as well as refugees from Thailand, the Philippines and Malaysia who were fleeing Communist oppression in Laos and Cambodia.

1979 To mark the International Year of the Child, ACN introduced the Child’s Bible in 1979, which now has more than 51 million copies in print and is distributed worldwide in 189 languages.

Throughout the late 1980s and 1990s, as Communist regimes in Central and Eastern Europe collapsed, ACN worked to bring relief to the suffering in Eastern Europe.

2000s, ACN extended aid to victims of conflict in Rwanda, Sudan, and the Democratic Republic of Congo. Our help continues in Nigeria and other regions in Africa under the devastating influence of Boko Haram.

2003 ACN founder, Father Werenfried van Straaten dies on January 31st at the age of 90 in his place of residence, Bad Soden/Taunus.

2011 Aid to the Church in Need was elevated by Pope Benedict XVI to the status of a Pontifical Foundation. This canonical act was enacted by a Chirograph, an official document in Latin personally signed by the Pope.

2014-19 Opening of ACN South Korea, the international pastoral charity’s first office in Asia. Further expansion of the charity to Mexico, Malta, the Philippines, Colombia and Slovakia.

2015 A dear friend to Aid to the Church in Need, Pope Francis said of ACN: “I entrust them to carry… out in the world gestures of closeness, goodness, love and mercy.”

2019 ACN receives the Path to Peace Award from the Mission of the Holy See to the United Nations.

2020 Worldwide support to Christians in their fight against the Covid pandemic.

2020 Emergency campaign for Lebanon after the Beirut blast.

Today, ACN continues working to counter the persecution and killing of Catholics and Catholic religious by Islamic fundamentalists, and is reaching out to the millions of displaced persons in Syria and Iraq, and other countries in that region. It also remains prepared to come to the aid of those who suffer when natural disasters occur.

Thanks to the generous support of our ACN family of faithful, Aid to the Church in Need continues to reach out, wherever the need is greatest, bringing spiritual and material aid to millions of poor, forgotten, and persecuted faithful in more than 145 countries. Read more about our active projects here.